History of the Village of Mariemont 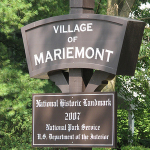 Mariemont is one of but a few planned communities in the United States, with a rich and unique history that is the the hallmark of the village. The Village was designated a National Historic Landmark in 2007. We not only encourage you to visit Mariemont, but take the time to learn what makes us so welcoming and unique. Information about the Village’s history is available through the Mariemont Preservation Foundation. Visitors are welcome in the Foundation’s Archives Room, located at 3919 Plainville Road, on Saturdays from 9:00 to 12:00 noon. For more information about Mariemont’s history, we encourage you to visit the Mariemont Preservation website.

Below information is courtesy of the Mariemont Preservation Foundation. They are a wonderful resource for Mariemont’s rich history. 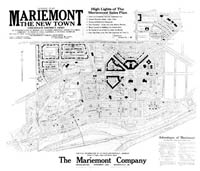 It was December of 1788 when the first group of people since the prehistoric Indians settled in our area. They chose a parcel of land now occupied by Lunken airport and named it “Columbia”, in honor of Christopher Columbus. Just a few weeks after their arrival, they celebrated Christmas with a communal dinner. Imagine their surprise when they were visited by a Shawnee hunting party, who stayed to share the meal!

December doesn’t seem like the best time of year to begin a brand new settlement, but it was necessary. Because of dense woods and a lack of roads, the early pioneers used the Ohio and Little Miami Rivers to transport themselves and their few belongings by flatboat. The Ohio was apt to dry up in places during the summer, and was too swift in the spring. The pioneers had to time their journey to coincide with the best water levels, which meant they landed here in late fall.

The early history of Mariemont (1786 to 1925) centers around the Stites and Ferris families. It was Major Benjamin Stites who first purchased land here. With his brothers and 24 other hardy souls, he founded the settlement called Columbia. Eleven years later, in 1799, they sold off the part of the land that now constitutes Mariemont to the Ferris brothers: Eliphalet, Joseph and Andrew. The Ferris settlement proved to be more successful, as the land on which Columbia sat was prone to flooding each spring, and the settlement was eventually forced to move to higher ground.

We have very little left from these early settlers. Their cemetery is located next to the Mariemont Community Church. If you have an opportunity to visit the pioneer cemetery, you will see the names Ferris and Stites quite often through the generations. Being the only families around here for a number of years, there was quite a bit of intermarrying. Besides the cemetery, other evidence of these early residents exists in two brick houses. One, built by Eliphalet Ferris in about 1802, stands next to Mariemont Preservation Foundation, across form the tennis courts on Plainville Road. It is one of the oldest brick buildings still standing in Hamilton County. Not to be outdone, brother Joseph built an imposing edifice in what is now Fairfax. It’s located at Wooster Pike and Dragon Way, and has a greenhouse added to the front.

The legacy of these early pioneering families existed at least until the 1920’s. When Mary Emery was buying the land for her “model town”, two of the parcels were owned by Ferris and Stites.

The land now known as the Madisonville Site (in Dogwood Park near the Mariemont Swimming Pool) was the location of a thriving village of Native Americans, one of the last groups to occupy territory in this area.The settlement existed from about 1400-1650, and covered the southwest corner of Mariemont. Estimates place the population at 250-300 people at its peak.

The site had long been abandoned by the time European settlers reached our area in 1788. Since there was no contact between the prehistoric group and English-speaking pioneers, we know very little about the people who lived here for so many years. What we do know about their way of life has come to us through a series of archaeological digs at the Madisonville Site.

There is evidence that people have been poking around the site, trying to grab a piece of the past, since the 1850’s. Certainly, “Potter’s Field” was well known to local residents in 1879, when it drew the attention of Dr. Charles Metz, a Madisonville resident, physician, and avid archaeologist. The name of the site derives from Dr. Metz’ close connection to Madisonville, and the fact that it was the closest town at the time the Indian village was uncovered. The owner of the property, Miss Phebe Ferris, granted Metz permission to begin a scientific excavation on her land, as she too was curious about what might be found. The initial work lasted for over 30 years (1878-1911).

Artifacts continued to be discovered long after the excavations ended. In 1923, as construction of the new town of Mariemont was beginning, an engineer reported finding a skeleton adorned with copper disks and beads. For decades, local residents and amateur archaeologists continued to dig and remove objects. Some are in private collections, but many have been lost. In 1980, the Village passed an ordinance that prohibited further digging without permission. Interest in the site remained, however, and Village officials wanted to find out how much of value remained.

In 1987, the Village issued a permit to Dr. C. Wesley Cowan to conduct a “short” exploration of the area. Immediately, an incredible wealth of artifacts began to emerge. The 20th century team had several advantages over their predecessors who were led by Dr. Metz. Advances in photography and radio carbon dating greatly aided the modern scientists in interpreting their finds, as did much greater precision in mapping and field notes.

Combined with the work done earlier, a picture of life at the Madisonville Site has emerged. Postholes indicate a grouping of dwellings with a central plaza. Pottery pieces place the group in the Late Fort Ancient period. We do not know if the tribe was part of a larger group of Native Americans that perhaps are still in existence today, such as the Shawnee, but DNA tests are underway to see if a connection can be found. Skeletal remains were unearthed that had been buried with ornamentation and with pottery placed at the shoulders of the deceased. There is no evidence of direct contact by these Late Fort Ancient people and the arriving settlers. One or two artifacts of metal have been found, but were probably acquired through trading with other tribes. The Mariemont Preservation Foundation has a collection of artifacts (available for viewing on Saturdays) that includes musical instruments made of bone, bone jewelry, stone and bone tools, arrowheads, a bear tooth, and much more. Items from the Site are housed in museums all over the world, including the Smithsonian Institution, The Peabody Museum (Harvard University), and the Wanganui Museum in New Zealand, to name a few. The Madisonville Site is considered to be of great importance in the history of the indigenous peoples of the Ohio River Valley.