The Tradition of The Town Crier 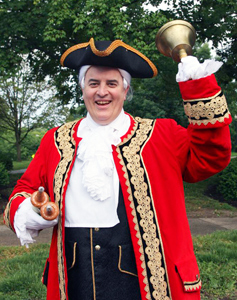 In North America, there are not many Town Criers. Our small village is helping to keep this venerable tradition alive in the person of Dr. Bob Keyes (left), who succeeded Hank Kleinfeldt.  One of his official duties includes leading the Memorial Day Parade. Dr. Keyes also dons the uniform to preside over the occasional community function.

The first Criers date back to biblical times and were advance men, sent into towns and villages by merchants to announce the next day’s sale of cattle, slaves, or imported goods. Once towns became more developed and the merchants remained as permanent fixtures, the role of the Town Crier shifted.

Towns and villages hired them to call out the news of the day and keep the citizens informed. Along with the Lamplighter and Night Watchman, the Town Criers were an important part of daily life, particularly in England. With a call of “Hear Ye! Hear Ye!” these “men of good voice” would draw people together to hear proclamations, edicts, laws, and news of plague, victories in exotic lands, births and deaths.

Much of the credit for Mariemont’s version of the Town Crier goes to Ralph Smith. The official wording used by the Town Crier and the authentic uniform he wears were researched and selected by Ralph after extensive study. The uniform is based on the look of a country squire. The tradition of the Town Crier is another unique aspect of life in the Village of Mariemont.